It almost feels like an undersell to refer to NYC/Maine-based artist YULLOLA as a singer-songwriter and producer; she practises imagination more than anything else, using audio, visual, literary and performance arts as tools to realise and express an overarching vision. Previously, she had been releasing music under the name Jasper Lotti – her track “Bad Juju” stands out as the catchiest tune on her undersung electronic pop debut from 2019, XOskeleton. Following an EP last year, called Kiss Tha Future, she adopted the alias YULLOLA for a new project altogether. It’s conceptualised around a character called YULLOLA, a cosmic priestess on a journey of self-discovery, traversing themes such as alienation, perspective, creation, change and understanding the surrounding world. Through her new album Priestess – its music which wanders between dance floors and bedroom ceilings, its confessional vocals and stream-of-consciousness lyrics, its videos which feature dance, theatrics and sculpture, and accompanying literary pieces featuring lyrical storytelling, illustration and symbology – YULLOLA taps into mythology, esotericism and the divine feminine to provide escape from (and insight into) the human condition. We followed up with the artist to hear more about her work.

Hi! How are you right now? Can you describe your immediate environment to us? “Helluu I’m well ! I’m at a Buddhist temple right now. Lots of orange, red and gold.”

I saw you tweet that you’re a Libra-Scorpio cusp. XOskeleton came out October 4, 2019. Then came last year’s EP, Kiss Tha Future, and now Priestess, both released on October 22 – right at that cusp. Were these birthday records for you? “The timing was honestly not intentional at all, just a really fitting coincidence three times in a row ! My vibe is quite spooky so Halloween around the corner sets the vibe. And every project feels like a rebirth in itself, so it’s cool to have it around my birthday.”

What was your environment like growing up? You’ve mentioned before that you were drawn to classical Hindustani music as well as gospel as a child. Was there much of a music scene of any sort where you were? “I grew up in White Plains, a suburb of NYC. It was really diverse, lots of immigrants. It felt really innocent and pure, I just have memories of playing marbles with my grandma, going to Chuck E. Cheese and the Galleria mall. My favorite store sold Japanese stationery. I was in these two bubbles of Hindustani classical music and gospel. I would go on local tours around the Tri-State area with both troupes and just be in churches or a random auntie’s basement practicing. That was probably the happiest I’ve ever been.”

One thing that stands out about your music is that it’s all you: production and vocals, lyrics and arrangement, and so on. Have you always worked in this way? “I’ve been a lone wolf my whole life, so when I started making music I just naturally gravitated towards doing everything towards myself. Even things I don’t know I just teach myself without thinking twice. But that’s changing though, my wounded heart is healing and allowing me to open up to others.”

Do you have a process for putting tunes together? “I don’t really have a set process. I can be inspired by pretty much any stimuli because I’m quite sensitive, like the way a piece of garbage sits on the sidewalk can speak volumes to me. I document everything in my journals and voice notes. Each song comes together in a different way, like a collage. I also hyper-fixate, so I burn myself out easily making music. I have to explore other mediums so I can compose. Dance especially, but also drawing and poetry have been lifesavers. It’s a constant dialogue between composing and my other practices. I use Ableton and my equipment is my laptop and usb mic. I don’t have a midi because I move around so much. My keyboard has been my midi !”

As YULLOLA, you’ve essentially created this mythos from which the album has been delivered, along with the videos. But there’s also artwork, symbology, movement, sculpture, even fantastical, poetic diary entries on Wattpad that’s stemmed from this concept. How seamless is it for you stepping in and out of this persona, this vehicle for expression? Is everything that you do YULLOLA now? “In my everyday life I just feel like a little nerd getting into wormholes creating and researching for YULLOLA. But I truly step into YULLOLA when I have an end product worthy of presenting to her. Yup it’s all YULLOLA now. I am her faithful servant.”

You’ve mentioned that you’ve drawn inspiration from divine feminine spirits: Yanagi-baba, the Japanese folkloric tree spirit; Rokurokubi, the Japanese long-neck demon; the Egyptian sky goddess Nut; Kali, the Hindu goddess of time and death. What is it about these figures in particular that you’re drawn to? “I’m really drawn to their dark divine feminine energy. As a child I couldn’t relate to the wholesome portrayals of female figures and goddesses, I was always obsessed with darker characters like Buttercup from the Powerpuff Girls or Sailor Mercury from Sailor Moon. So these spirits really helped me place myself in an archetypal way and understand why I am the way I am. Kali and Nut are raw creation energy, mothers that love so strongly that it creates and destroys the cosmos. The tree spirits and Rokurokubi are more haunting and wistful, I love how there is a terrifying innocence about them. I wanted to portray this spectrum, because I exist in a middleground I’ve been calling “spooky spiritual.” I feel like a dead child haunting this plane, but also striving to strengthen my connection with the divine.”

One of the coolest moments on the record is on “Slather Lather Pyaar”, when you switch to singing in Hindi. Is this the first bilingual track you’ve put out? “Yup it’s my first. When I was composing, random Hindi phrases just came to mind and just sounded good, so I just decided to keep them. I know they are nonsensical, but it’s just a cute moment.”

Do you have a live show in the works for YULLOLA? “Yes I love performing ! I treat my live shows like performance art, with choreographed breaks and instrumental inserts that build an allegory.”

Lastly, I was wondering if you had a favourite Angel from Evangelion? “I love this question !! My friend had a dream that I was riding a giant spider and that really stuck with me, so I would say Matarael :-)” 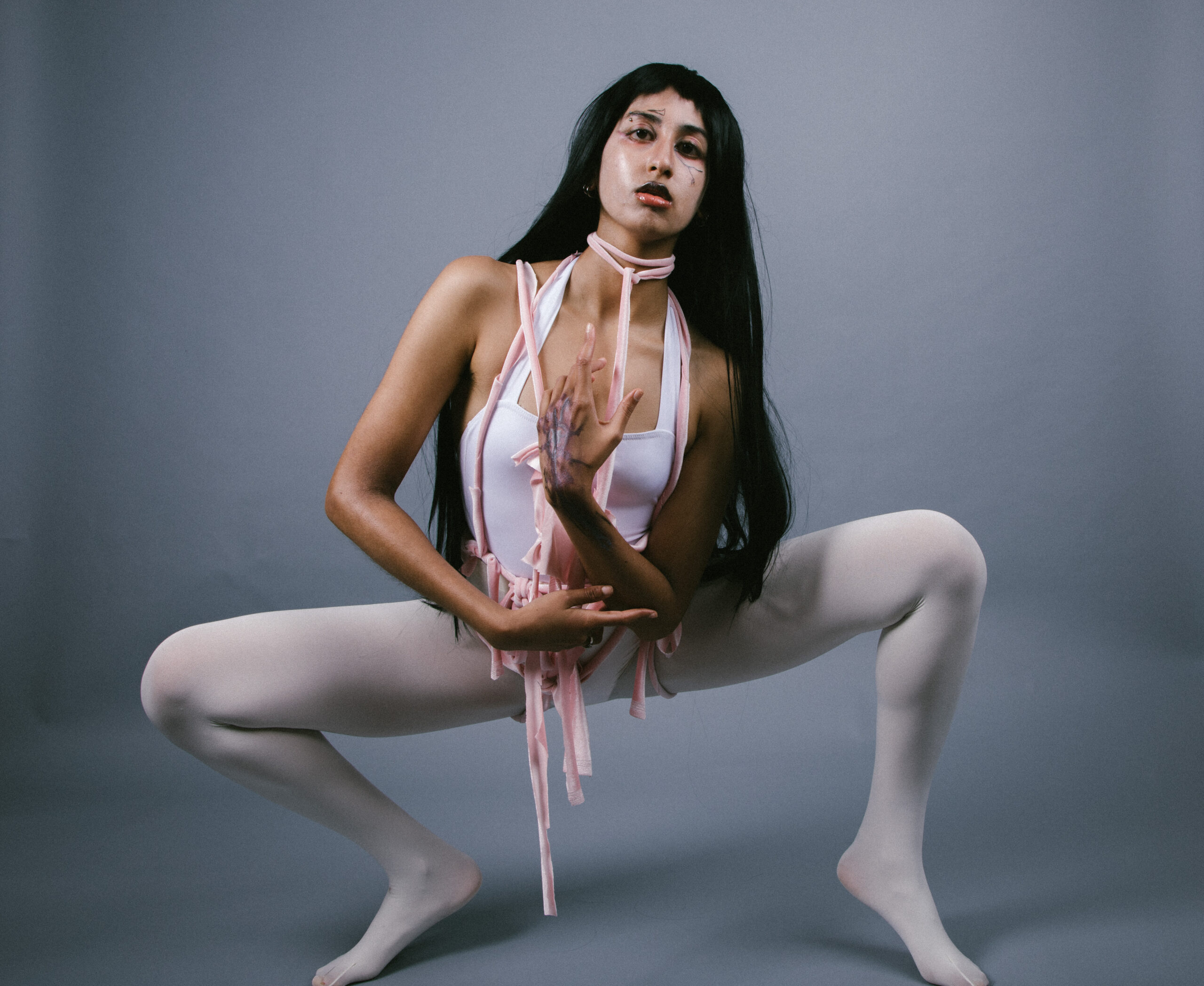 YULLOLA – Priestess is out now and available to purchase via Bandcamp or listen on major streaming platforms here.