In an interview from 2017, DJ Richard mentioned how he and Young Male originally thought the idea of pressing more than 150 copies of White Material 01 and 02 might be just a tad too much, jokingly expressing that they were going to still have copies left over when they would be on tour five years later. What they got instead was cult status, with demand outstripping supply in the first year more than they could ever have imagined. With the label having now wound down to a close, their tenth and final release a debut album from Galcher Lustwerk, DJ Richard has continued to forge a path that’s more certain, fined tuned and propagating in textures and tension. His two albums for Dial, Grind and Dies Iræ Xerox are good examples of this, flirting emotively through subtle moods and melodic optimism. With the recent release of a new record called Eraser on Berlin-based label Flexxseal, we caught up with the producer to talk albums, homesickness for the coastline, and long somber drives through the White Mountains influencing his music. His Truancy Volume, recorded in an underground warehouse space in Philadelphia called the Sprinkler Room, is an hour-long mix of contemporary artists and labels that are currently inspiring him.

Hey, thanks again for taking out time to do this mix and answer some questions, everyone at the site is a long time fan so very excited to get this one out!  Going back to last year, I wanted to touch upon the latest album Dies Iræ Xerox quickly as it’s been described as being produced a means of catharsis for you whilst moving back home from Berlin. Having lived there since 2013, can you tell us a little bit about the album and the timings of things? I’m keen to know if it was made when you were already back home or producing still in Berlin knowing you’d be leaving soon. “Sure, I moved to Berlin in the fall of 2012 and left in the fall of 2015. The LP was produced after I moved back to Providence, Rhode Island. It was a rather slow process compared to the first LP, recorded in bursts rather than a consistent flow of time. Work on the album really began when I found a Juno-106 on craigslist for an insanely low price and bought it. Almost all the synth work on the LP was created with that machine.”

I was reading that your debut album Grain was completed in a week after the masters of original finished LP got stolen with your computer. Having more time with this one, is there anything you focused on more carefully or were more conscious in whilst creating? “Ha, it was a little more than a week, if I remember correctly it was about three months. This time around I tried to have less “big” ideas about what an album was meant to be, and instead just focused on created an insular world to inhabit. The first time around I had the idea from the beginning that I wanted to make a record about homesickness for the coastline I grew up on, and to have it progress in a traditional narrative sense. With D.I.X. I let the themes emerge on their own and tried to steer away from too linear of a listening narrative. In terms of sound, I wanted the tracks to feel dry, flat, and slightly distant, with moments of airiness. I’m not sure how successful I was at following that prompt but in the end, I felt like the record ended up sounding more cohesive than the first. A lot of the album was recorded in moments of personal darkness, so the theme of apocalyptic catharsis emerged on its own. (Although it was most certainly influenced by some medieval texts and manga I was reading at the time.) I’m a huge nerd for the middle ages and dark, brooding fantasy.” 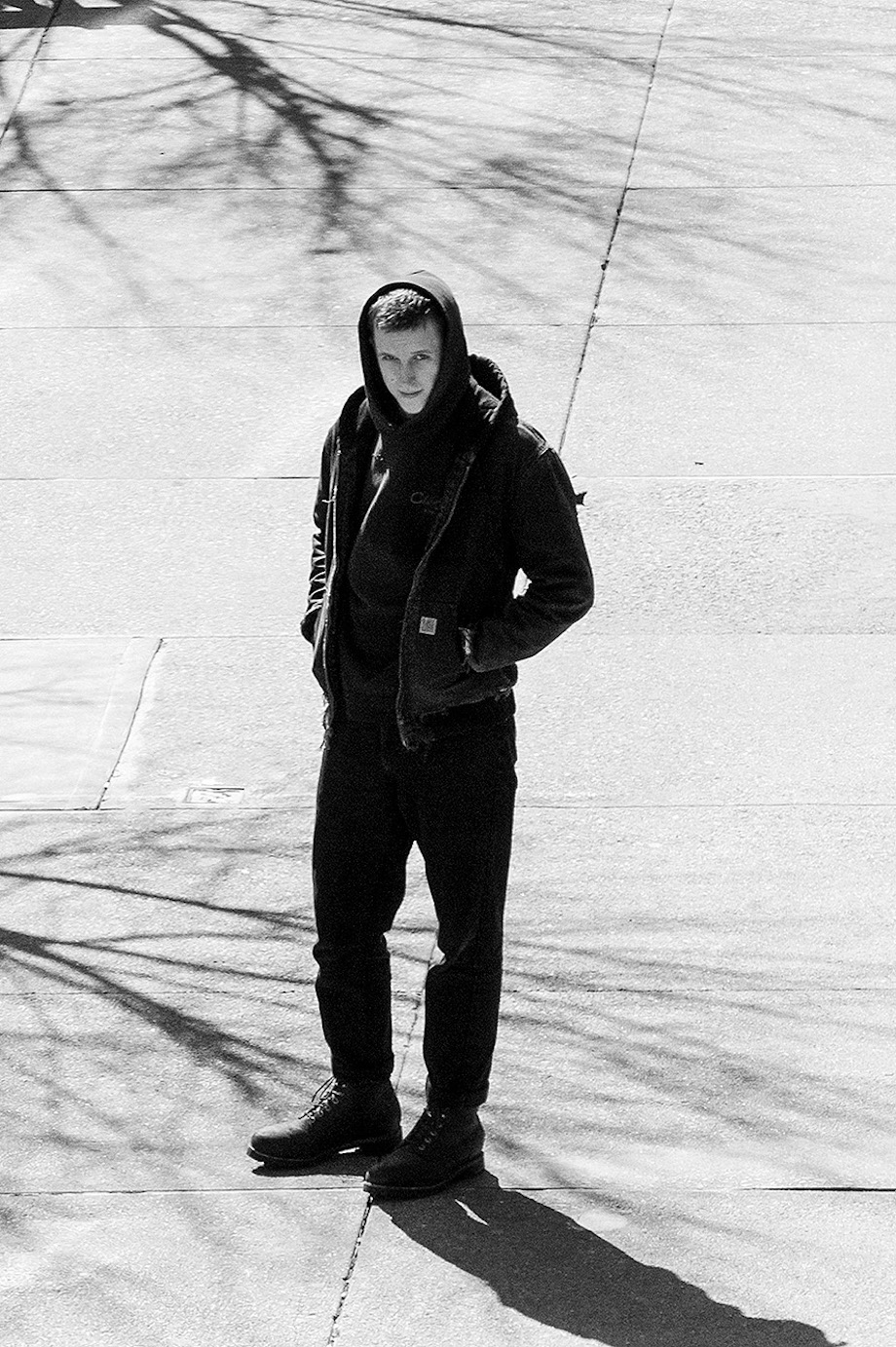 I think “Final Mercy” is one of my favorite tracks on that LP, very easy to get lost in those six minutes. The beatless tracks in general really come into their own on the LP. In an old interview, you mention how most of your time living in Providence before moving to Berlin was spent focused on noise and drone. Was there a sense of harking back to that for this at all? “Thanks, it was also one of my favourites while I was putting the album together. I never really stopped making non-club music, I just chose not to release much of it for a period of time. Moving back to Providence was definitely inspiring and a breath of fresh air, but I think if anything the beatless tracks on the album were influenced by physical locations and experiences more so than my relationship to the noise scene. For example: I had been dating a guy who worked as a snowmaker on a ski mountain up north, and spent time driving through the mountains there with him. “Final Mercy” and “Stygian Freeze” (from the Path of Ruin EP) were both recorded directly after an intense, somber drive through the White Mountains, specifically around the base of Mt. Washington as a storm was coming in. The relationship was beginning to come apart at that point, and the image of the mountain stuck with me afterwards. When I recorded “Final Mercy” I remember picturing the curves of the road and the momentary glimpses of the stark peak through the trees as it got closer.”

There was an interview where you mention going back to Rhodes for a month in the summer of 2016 and enjoying the change of pace and being productive again. I remember reading you were flying-high with getting tracks finished when you first moved to Berlin, had this slowly waded? “There was a period in Berlin, I guess after Grind came out, that I barely recorded anything. I was touring quite a bit and working at the Record Loft full time. I just found that when I was at home I needed a break from club music for a while. I also quit drinking in 2014 and was taking the time to work on myself. Towards the end of living in Berlin, I actually recorded hours of music with Draveng, but we haven’t released any of that stuff, yet.”

Yeah, I was reading that you had been working on some tracks with Draveng. You also got together to make music with Carsten Jost on a number of occasions whilst living in Berlin, right? What sort of input do you like to get across in a collaborative process? “With Draveng, the recordings are pretty much all completely free-form and improvised, with a lot of randomisation and humour in the process. We have hours and hours of recordings and some of it could get released someday. Draveng is one of my absolute favourite people to collaborate with, and I love them deeply as a person. Working together comes very easily to both of it, and it always feels like such a joy. We were in a band together called Buddy Bag, back when we lived in Oakland in 2010, and since then we have sporadically found time to sit down and record. Unfortunately, we live on opposite coasts. We were able to record the Funky Doodle record one bleak new year’s day with our dear friend James K, so at least there’s that. Carsten Jost and I have been friends for a while so it was a blast to work together; we should do it again.”

With you back in the States and now closer to people like Morgan Louis, Alvin Aronson, Young Male and Galcher, what does this mean for White Material going forward? It must be nice to all hang out in person again. Has releasing something produced together ever crossed your minds or would it just feel somewhat forced? “I love being able to see all of them when I can, although it’s certainly not as much as I would like! While I was living in Rhode Island, Morgan and I would go for walks in the woods near his house which was always a nice treat. I see Alvin if I’m out on the West Coast, and see Galcher and Quinn if I’m in NYC ever; we usually just hang out at their place and play Magic: The Gathering. I think it’s safe to say at this point that everyone is kind of doing their own things but everyone is always open to working together on projects now or in the future. Even though the label isn’t around anymore, I still feel incredibly close to each of them and feel so lucky to have shared that platform and moment with everyone involved.”

What’s it like being back near an ocean again too? :) “I actually moved to Philadelphia this year to be with my boyfriend here, so I miss it! But we take little trips to shore when we can.”

Let’s talk about the latest release Eraser that’s come out just this month on Flexxseal. The range in tempo and textures is amazing and I think His Threshing Floor is especially one of your finest 12” tracks to date in my opinion. Is there anything you wanted to accomplish or highlight with this record, seeing as it follows a sophomore album. “Thanks for the kind words! I’m very happy with how the record came out. Since D.I.X. I think my ear for how I want my production to sound has become much for finely tuned and on the EP it really crystallised. I didn’t have any overarching concept for the record other than to make some tracks that I would like to play in my sets. I’m excited to keep recording and see what comes next.”

What can you tell us about the mix you’ve recorded for us? Did you approach in any particular way and are there tracks or artists you’ve included that you might want to shout out? “I wanted to record a mix that was a snapshot of what interests me as DJ recently and to focus on some contemporary labels and producers that I find inspiring or compelling. A big shoutout to the wild world of Neubau and the surrounding network of labels and producers. Such unique and killer releases! Also want to give a special mention to my wonderful friend Suzy who is behind the Pod Blotz project, who has inspired me since I was a little noise rat living in Providence in 2009. I recorded the mix while sick and accidentally under the influence of cough medication, so a few of the mixes are somewhat sloppy but fuck it, the point gets across. Recorded at Sprinkler Room, which is a fantastic underground warehouse space here in Philly. Thanks, Tina!”

Last usual question from us, when was the last time you properly danced and what was the last thing to put a big smile on your face?

“Last time I properly danced: while recording this mix! Last thing to put a big smile on my face: a big slice of chocolate cake.”