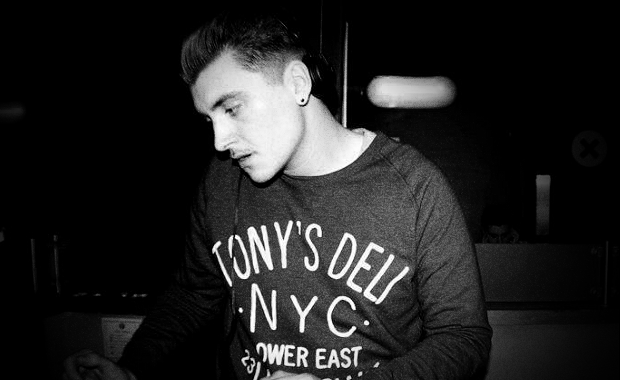 “I don’t dance” is a pretty bold statement coming from someone whose line of work is to make the rest of us dance – but Locked Groove clearly knows what he likes, and it seems to be working out. He shot straight to the top in 2012 with two EPs on Hotflush Recordings (“Keep It Simple” and “Rooted“) as well as one on Turbo (“Different Paths“), and Scuba’s heavy use of his material in his recent Fact mix shows that we have a lot to look forward to in 2013. Locked Groove has been in high demand lately, and his Truancy Volume reflects all the reasons why his DJ sets are worth catching. We caught up with him to see where he’s been at lately, which you can read below to find out such important information as why trance is maybe not so bad as you think and some of the more unexpected sounds that inspire him to do what he does.

Truancy Volume 59: Locked Groove by TRUANTS (Tracklisting after the cut)

For our readers who might not be as familiar with vinyl, do you mind briefly explaining where the term ‘locked groove’ comes from? “A locked groove kinda explains itself. It’s literally a groove that’s locked, so the music is pressed between two or more grooves that loop forever and ever.” And why did you decide to use it for yourself? “I started to use the name Locked Groove because when I started making house/techno, that’s exactly what I did. I took a small part of an old record, looped it and put a new beat under it, kinda like Soundstream and Daft Punk and the likes (but not as good).”

What are Locked Groove’s favourite locked grooves? “I’d say my favourite one is Steve O’Sullivan’s “Deux“.. Jeff Mills’ “Solarized” and the locked groove at the end of Peter Gabriel’s “White Shadow” LP.”

If you weren’t currently producing or DJing, what would you be doing? “I’d be a bum or probably have a really boring office job, because this is the only thing I can do better than average.”

What is something in your regular listening that we wouldn’t necessarily expect from you? “I’ve been listening to a lot of late romantic Russian piano music such as Scriabin. I just went through a sludge metal phase a couple of weeks back as well. I listen to a variety of stuff actually, the only time when I don’t have music on is when I sleep.. the rest of my days are pretty much filled with music.”

You obviously disregard a lot of boundaries per se when you’re making music, but are there any sort of guidelines that you set for yourself? “I don’t think I could ever set myself boundaries, that’s the reason why I got into music making because I can do whatever I want and I have 100% control over the end result. The day that I have to change that is the day I get out. Fuck the man (I’ve always wanted to say that in an interview).”

You draw inspiration from a lot of places, what has been a theme present in your creative process lately? “I could say the obvious thing and answer trance here, but no. It’s actually pretty funny where I drew my influences from, right now I’d say there’s an old Belgian rave pioneer who made insane stuff early 90’s, I recently rediscovered him and it’s fair to say he’s one of my main influences for now…”

What is something you always try to do when you play out, or does your approach tend to change every time?  “As far as playing out goes my approach changes every time and I never turn up at a club twenty minutes prior to a set really. I like to be in the club atmosphere a few hours before I have to play so I know what the DJ before me is playing and what the crowd is responding to. I do realize sometimes it’s like shooting fish in a barrel, because people are there to watch you play and not the warm up. That’s also why I always have massive respect for people doing the warm up, it’s one of the toughest jobs but when done right it can make a night something special in my honest opinion.”

Do you have any plans to start doing a live show? “I don’t think I will do a live show anytime soon as my expectations for that are pretty high. I might do it at some point when the time is right, but it won’t be just me a laptop and a midi-controller then.”

Your love for trance is not a secret, and this is a trend being embraced across the Hotflush camp and beyond. We know we’re guilty of holding a lot of preconceptions, so what are some of your favourite trance songs (i.e. ones that we might not even realize count as ‘trance’) and Why Is Trance Not A Dirty Word? “HA, I knew this was gonna come up and when I say trance I do not mean Tiësto. Trance is a big part of my Belgian heritage and honestly before it really kicked off in the stadiums, there were some serious gems made. I think back in those days, the early nineties, genres were cross pollinating each other a lot and there was a lot of freedom, kinda what we’re seeing again now. A song can be trance without actually being trance in the purest form, it can take you away and have progressions without being cheesy. Trance is not a dirty word because for me it means melodies, progressions and vibes. Some of my favourite ones are the following and I’m just gonna include some guilty pleasures here as well;  The mackenzie – No Promises, Orbital – Halcyon On And On, CJ Bolland – Camargue and Jam & Spoon – Stella.

Who is one person outside of your genre realm in music that you find inspiring (career-wise or what they’ve done with their music)? “Career-wise it’s a tough one because I respect a lot of jazz pianists and musicians but most of them were raging alcoholics or drug addicts so I have to be careful what I state here, haha. I’d say one of my biggest idols, as you may, is Bill Evans (on a musical level).”

In one of your interviews you mentioned how, through the owner of a record store where you worked, you got into “experimental, avant-garde, new wave” music. With that in mind, what do you think about the (increasing?) “bleeding in” of those types of musics into contemporary house/techno – i.e., labels like Pan, Spectrum Spools having fans among those who generally listen to dance music as well as those like  L.I.E.S. drawing on post-punk, noise and experimental? “I think it comes and goes in waves but I’ve definitely noticed an ongoing interest in experimental music among young people who listen to dance music. I think it’s a good thing really, because people who listen to that kind off stuff are generally more open-minded on the dance floor as well, something I can only encourage. At its core I think it was always there, most ‘older’ producers I know certainly know their stuff, but recently I’ve noticed a lot of young people are digging deeper.”

Further from that, would you play out any experimental music, or music which may not be thought of necessarily as “dance music”? “Yeah sure, I have been know to start of a set with a weird track or two when the crowd is right.”

Who is the best (or most inspiring) person you’ve seen play out recently and why? “That’s a tough one, I can’t really think of someone or choose a particular one, I’d say Theo Parrish is a constant because he puts his entire soul into a set when he plays out.”

Can you give a little background on the mix you’ve made for your Truancy Volume? “It’s a mix of stuff I’d definitely play out at a club and stuff that will more likely stay inside of the comfort of my bedroom or a party with really open minded people. It’s done in one take, no edits, no second takes.”

And our standard closer: when was the last time you danced? “I don’t dance.”