We have a close-knit community of Bristol-based producers to thank for one of the 2010’s most distinct movements in electronic music, and few rep the city as hard as Kahn. Emerging around the start of the decade with releases on Peverelist’s Punch Drunk, Idle Hands and Mala’s Deep Medi, he’d go on to form a dancefloor-destroying partnership with Neek as well as the visionary Young Echo collective. His productions drift across the murky waters between dubstep and grime, channelling roots and soundsystem culture. With Neek, he runs labels Bandulu and Hotline, the latter emulating old-school heuristics where you’d ring a phone number to hear new releases over the line to order. This month, the Young Echo crew will self-release their second, self-titled LP of squad selections, as picked out by the man himself.

For our 203rd Truancy Volume, Kahn has pretty much immortalised the lingering spectre of this dark winter. “I wanted it to be different from anything I’ve put together before, more personal perhaps,” he says of the mix, which connects the dots between the likes of Sisters of Mercy, Pharmakon, Orphyx and Omar Souleyman. It’s a staggering, foreboding collection of unexpected selections that simultaneously come across as natural and cohesive choices orbiting the Kahn sound. Listen, download and read our interview below.

Your single “Dread” was omnipresent in Leeds at the time of its release on Deep Medi – I remember learning to DJ with it, actually. It’s been over five years since then, and you’ve now got all sorts under your belt. What things have changed for you? What things have stayed the same? “Yeah it feels like a long time ago. The first thing that comes to mind in terms of what’s changed since that period is that I’ve been lucky enough to have to the opportunity to travel all over the place performing music and the main thing that’s stayed the same in amongst that is my remaining a proponent of the music from my community, both in Bristol and beyond.”

There’s a tangible locality to plenty of your music, carrying its roots through sound. It’s a sound you’ve taken as far as India now – how does it connect with international audiences? “I think it’s an amazing experience for most artists when they go to a new place for the first time and people know and enjoy their work, I guess it’s a testament to the power of the internet in exposing new music to people across the globe. You put something out into the world and you never know where it’ll end up or who will engage with it.”

“I do think of it as a privilege to be able to bring the music of my community to international audiences and although, naturally, the music often makes sense to certain crowds more immediately than others, just the act of exposing an audience to a new sound for the first time can be a fulfilling experience.”

Previously, you’ve referenced darkness and heartbreak as sparks for your creativity. Are you still creating from the same place? “I can’t recall specifically what I’ve said in the past but I will say now that it’s not necessarily been a conscious effort on my part to incorporate those elements into my work.”

“If you want to write music that is honest to you it often involves a lot of introspection and can be quite an intense and emotionally exhausting experience at the best of times. You don’t always know what is going to come to the surface by regularly putting yourself through that. I’m sure a lot of artists would attest to the self doubt and lethargy that can infect your creative process if you don’t find a way to acknowledge and go through those low points but somehow retain control and create work out of it.”

“Ultimately I can only really draw from my own experiences and the emotional environments I find myself in so anything I create is going to be a reflection of that, subconsciously or otherwise.”

“On a side note however, from here on in we are in fact renaming the Kahn & Neek project to Darkness & Heartbreak.”

Your partnership with Neek is so well established at this point that “Kahn & Neek” naturally rolls off the tongue. What’s the key to long-term collaboration? “I think much like any other relationship you might have in life, it’s all about open communication and trust in each other. Sam (Neek) and I have been close friends longer than we’ve been colleagues and are lucky to have a very supportive and talented community around us which gives us a strong foundation to work from.”

“Collaboration has been a key element in everything we’ve done really, from joining forces with our friends who are designers and artists or who run their own record labels or websites to working within the experiment in creative democracy that is the Young Echo collective, we’ve always drawn strength and influence from our peers and I’m sure we’ll continue to do so moving forward.”

One of my favourite things you and Neek have done would be the remix of Plastician’s “The Search”. I remember hearing it in full force at Unsound Kraków in 2014, where your Young Echo squad were out in full force so far away from home. What is it that makes it so important for you to roll crew-deep? “Yeah I remember that in duality actually; I loved being in Kraków and the array of music that weekend was amazing but I also ended up having one of the worst hangovers in my life by the end of it! You know them ones where you meet the devil.”

“As I say, collaboration and community has been integral to my path and it’s truly a pleasure to have the opportunity to travel and perform with your comrades.”

Young Echo’s self-titled, second collective LP is due in February. Can you give us some hints as to what we can look forward to? How do you go about putting together a compilation such as this? “Yeah it’s due out on the 16th February on our own Young Echo label and we’re all really excited for it to finally come out as it’s been a long while since we released a record all together like this. Although musically it was a completely collaborative effort, I actually had the personal task of compiling the record and making sense of the 50+ tracks that were initially submitted by everyone when we began putting it together. It took a lot of time and effort to get the final track list to a place that we felt represented us as all as a collective but we’re all really happy to finally have it done.”

“I guess the key difference with the new record in contrast to our first album is that we’ve gone from six members to eleven and subsequently there’s been a rather dramatic shift in the musical dynamic and overall sound of Young Echo. For instance, the new material is generally a lot more vocal heavy and whilst the experimentation and free-form nature of our past output is still very much at the heart of our ethos as a collective, we’ve incorporated more traditional song structures into some of the work and given more space to the contrasting voices within our group.”

Across your various aliases, your music has its signature sounds and motifs. (I guess the now-fabled war dub outbreak of 2013 highlighted that.) Is label identity just as significant for you? What makes one tune Bandulu and another Hotline? How do you decide if a tune belongs on one of your own labels or somewhere else? “After a track’s been written and I’ve sat with it for a while it usually just becomes apparent where it belongs, or if it’ll even come out at all. I try not to write with a preplanned strategy of where I want a piece of work to end up as it tends to dominate the direction of the music and usually ends up being quite contrived.”

“In the past I’ve been conscious to keep the projects I’m involved in relatively separate in terms of how they’re presented, whether its Kahn & Neek, Gorgon Sound, Young Echo or anything else I’m involved in. Obviously certain ideas and influences are going to spill over into otherwise quite disparate projects but I remember early on we made a point of wanting to keep the different projects clearly defined from each other.”

“However, as the person I collaborate with the most, I think Neek and I are becoming less and less attached to the often quite rigid specifics of certain genres and as we grow artistically that will probably come across in our work.”

This gorgeously gloomy mix you’ve done for us is filled with songs one wouldn’t expect to hear you play out, yet each one seems unmistakably, inextricably linked to your productions. What were the feelings behind the selections? What was the conceptual starting point? “I compiled the tracks in this mix from various sources though primarily it’s a mixture of older records I’ve not had a chance to include in a mix before alongside more recent finds and interests of mine.”

“When I began piecing this mix together I didn’t have with a specific aim in mind other than I wanted it to be different from anything I’ve put together before, more personal perhaps. I just let the music guide the direction really and as the mix began to take form I tried to give the individual tracks space to brood until eventually the atmosphere grew from restraint to aggression. It was all rather cathartic actually, I really enjoyed putting it together.”

Can you tell us which things are exciting and inspiring you at the moment, outside of club music and outside of music itself? “I’m really thinking about it and it’s actually quite a tricky question to answer, not just because if I break it down most of what I do or think about is related to music in some way but also because there’s not much to be inspired about at the moment, especially in the U.K. The future looks a bit fucking depressing to be honest..”

What plans do you have in the works this year after the Young Echo album drop? “Spending as much time in my studio as possible and seeing what happens..” 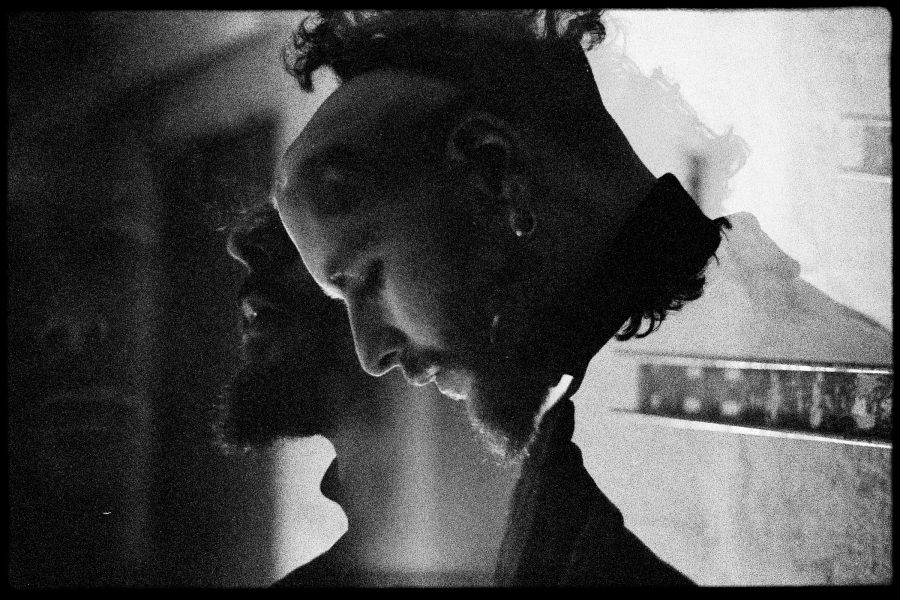 14/02/18 Update: One week after publishing this Truancy Volume feature, we were made aware through our readership that the mix contained a piece of music that was a tribute to and celebration of Bashar al-Assad. This is something we would not deem appropriate and should have made ourselves aware of well in advance – we apologise for the mistake. We are grateful to our readership for pointing it out to us, and to Kahn who amended his mix and provided the following statement when we brought the issue to his attention:

“In the original version of this mix I included a track by the Syrian artist Omar Souleyman that contained lyrics of a political nature which, to my regret and embarrassment, I neglected to check before submitting to Truants. I’ve subsequently replaced it with a collection of different tracks as it was not my intention to include music with such subject matter in this mix.

“I have a deep love and appreciation of Arabic music in its many forms and it remains one of my favourite musical traditions. I’m disappointed with myself that, in this instance, my sole fixation on the musical qualities of this specific track, along with my inability to understand the language, has led to this regrettable mistake. I accept full responsibility for not being more thorough and sincerely apologise for my unintended insensitivity.”