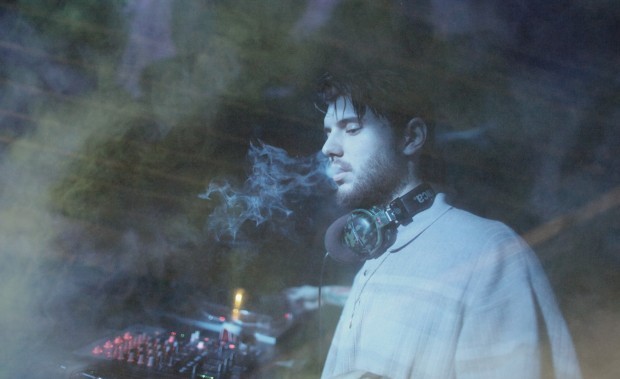 Huerco S. is someone that we’re predicting to be on tip of a lot people’s tongues by the end of next year. He’s a Kansas City based artist that’s nonchalant without being dismissive and excited at prospect of more people listening to and enjoying his music. In the last two years his name’s been associated with labels such as Wicked Bass, Opal Tapes, B. YRSLF Division and in a few months’ time it will be stamped on the sleeve of a Future Times record and Opal Tapes’s first 12-inch reissue. Possessing a real DIY attitude nothing is off limits to him and for the perfect example look no further than his feelings on audio quality. We had a chance to speak with him about his sampling techniques, audio artifacts, and cheesy nineties CDs. He represents his city (not quite as much as our favorite rappers, but it’s important to him) and by the end of our chat revealed just enough about himself – hopefully his music can answer any lingering questions. The proverbial bow of this package (interview) is his Truancy Volume, which is a manifestation of his eclectic tastes and indiscriminate lust for sonic diversity and brings all his remarks together. Prepare your minds and bodies for a 50-minute crash course in the musical stylings of Huerco S.

Let’s start off slow, how have you been? “Good, just rushing around packing shit for New York.” Are you doing a short tour once you get there? “Na, just one show. Looking forward to seeing old and new friends, buying records, and taking it easy.”

There’s a bit of mystery hovering around you and your music, is that an intentional aesthetic? “Maybe, I don’t really know anymore. I just don’t see the need in having promo pictures of me standing by some turntables or in my studio. The audio is the identity and no one should care what I look like.” Well said, so maybe in the beginning, but at this point you focus on the music? “Correct.”

We get the feeling this project is some sort of sonic exploration, is there a goal or message behind your music? “Towards the beginning I was trying to make dance records, but now I don’t feel as confined by a beat. It’s all a skewed perception of what I think dance music is anyway. I’m just using my influences as a very loose guideline, be it techno, drone, house and then just saying, “Fuck it all.” There aren’t clubs or anything like that here, so apart from the Internet I don’t really know what people are dancing to; not that I’m particularly concerned.”

That leads us into another question we had brewing. One of your first tracks was on a BYRSLF compilation last year. Over the last year you seem to have developed quite a bit, musically, what spearheaded that development? “The track that appeared on that compilation was made in early 2010, so it’s understandable to think I’ve drastically re-envisioned my output. The way music is put out tracks take forever to be heard by the public and by that point who knows what the artist is already on to.” So you feel you’ve matured and gotten a bit of a foothold on what you’re doing since then? “Definitely, I’ve been producing on my own since I was 17, I am 21 now. I probably didn’t make a decent track until I was 19 though. It’s all trial and error and I’m in no rush. I don’t know why everyone else seems to be.”

That’s a very rare attitude to find today. You’re from Kansas City, how has living there affected your music and attitude? “The city’s beautiful and it gives me a lot of time to work. Right now everything’s so open that I’m free to do what I want when I want.” So some of your inspiration comes from your surroundings? “Yeah, all the parks, the Victorian mansions, One Kansas City Place, the boulevards, the West Bottoms, sitting on porches, climbing on roofs, and the Rivers.”

Have you ever considered moving to a major coast city or would that totally upset your flow? “I’ve thought about moving, California’s never crossed my mind, but maybe New York. I think I’d rather live in Sweden. I don’t think any particular place can influence me more than Kansas.” That’s understandable, Kansas is your home. New York will try you; it’s expensive and most people just want to get by. “Definitely, I only work part time and I still feel like I don’t have enough time for music. I can’t imagine working over 40 hours just to make it somewhere.”

Moving away from location, your releases and clips tend to have ambient borderline new wave elements in them. Have those types of music influenced you? “I never really listened to much new wave, but I’ve always been into more textural stuff. My dad had some total cheese nineties new age and ambient CDs that I remember loving.” So those sounds are the unintentional side effects of your experiments? “Yeah, they’re all just streams coming back and going out.”

We know some people don’t like giving away their exact setup, so without going into too much detail can you give as an idea on how you go about starting a track? “Well, without going into too much detail – I first turn my laptop on… haha. I mostly work digitally, although I’ll record some samples to tape. I’m looking for artifacts.” What do you mean by artifacts? “Things that are lost in the mix, something that only becomes apparent after listening to the same loop for an hour.”

Okay, it sounds like you have an interesting take on sampling. What are some of your favorite sources to sample from? “I’m not concerned with sampling from the highest quality audio. The compression of audio files to lower bit rates produces some amazing result. I don’t think I ever discriminate when it comes to sampling. I sample whatever I hear and whatever I like.”

Very cool, like El-P said recently, “sampling is an amazing art form that can yield results that no live recording can ever yield”. Alright, so let’s talk releases. You made your official debut on Wicked Bass with your “No Jack EP”, how did that relationship come about and how important was that EP for you? “They hit me up on Soundcloud back when I first started posting tracks. They originally wanted to do a release with some old tracks, but as that went on so did my production. “Untitled” and “Bypass” were all made 2011, while “No Jack” was recorded in 2010. It was kind of this Todd Edwards tribute and I just pitched it down from 131 to 106 for the final version. They were interested in putting out a 12-inch with the newer track and we just went from there. I think went over well; it took quite some time to be release though, about a year… but I guess that’s the nature of the beast sometimes.”

Was this another one of those times where by the time the tracks came out you had moved on then? “Well definitely for the title track, but by the time I made the other two I felt like I was coming into my own.”

It must have felt good to put that out and still be content with it. You’ve also self-released music and put out a cassette, so you’ve hit all the major and not so major formats. How important is the medium your music is heard on to you? “It doesn’t really matter. My music sounds like shit, so if the listener can’t hear the difference in audio qualities then I don’t care. I’d rather continue putting out vinyl and cassettes, but mostly for the art and the physical bond someone can have with the piece. It’s an ongoing relationship with the music. I’ll shuffle through my iTunes and come across lost gems, but with records and cassettes I know exactly where they are because they physically exist.”

What’s next for you? The Future Times crew teased a new jam from you a few months back, when can we expect that to hit the shops? “I have no idea on the exact date for the Future Times record, but I’m told in the Spring. I’m sure we can expect some previews early next year. It’s just a three track collection of more dancefloor music. I’m trying to maintain a balance.” A balance between what? “Well, the majority of what I’ve been doing for this LP has been beatless.”

Wow, an LP, your music seems like it would suit the format well. Can you elaborate on the it? “Dancefloor music with no kick drum…well most of the time. Right now I’m really fascinated by early Mississippian culture & mound building. The recordings tend to fade-in and reach a promontory only to fade-out, much like an earthen mound. It’s all about superstructures, arcology; applying these architectural and sculptural techniques to sound. As dense as rock or as light as paper.”

Sounds interesting, is it finished or in progress? Are you going to shop this around or is there a label already interested? “I’ve been working on it for about three months now. I’m really humbled by the opportunity at hand. Just in the fact someone wants to give me 45 minutes of recording time and they happen to be an artistic idol, STOKED. Currently there’s no due date, although the label in question would like it to the see the light of day sometime around Spring 2013.”

Wow, so things are really picking up for you. Standard last question, what’s your drink of choice? “Gin & tonic.”