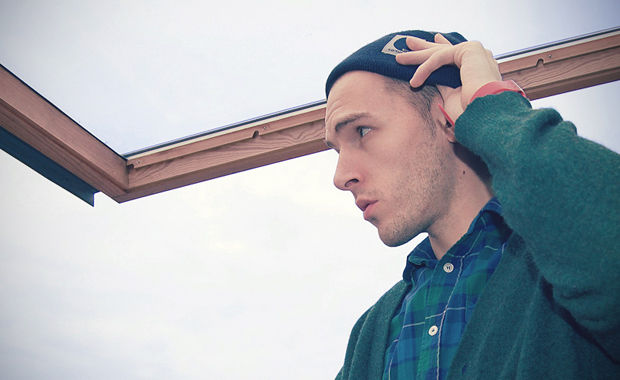 With only two releases to his name Belgian producer Jazz Neversleeps isn’t breaking any world records, however he is pouring his energy into jazz influenced and hip-hop informed house music. Listening to a track like “Live in Maredsous” demonstrates the ease at which he appropriates samples and flips them into melodic gems. Aside from writing music, he co-runs On-Point – a record label that since 2010 has put out house, funk, and hip 12 & 7-inches. Between all the artists one thing brings them all together – a love for hip-hop. We had a chance to speak with Jazz Neversleeps about where his tastes originate and the reason for his extended absence. If that wasn’t enough he decided to give us a peak into his record bag with his lengthy Truancy Volume.

What does your musical background consist of? “First and foremost I will always credit my parents for granting me access to their record collection ever since I was like four years old. I was lucky to have my dad’s turntable in my room, and through them I first heard anything from Stevie Wonder to Kraftwerk and George Duke. All of that mixed with children’s songs of course. Chris Rea’s “On The Beach” was a big album for me as well. At that time my aunt’s boyfriend was a DJ at national radio and he often gave me records… I got quite a few techno classics from him, haha (of course I had no clue back then). In my early teens I got the first Jazzmatazz on tape through an older friend and shortly after Gang Starr’s Daily Operation. That was the first brainwash I guess. Shortly after, on a school trip to England, I discovered jungle and early drum ‘n bass, blasting through the speakers in a recordstore. The rolling funk breakbeats blew my mind… Never heard anything like it. A lot of the stuff I play now I only got into later, that’s things I discovered the last, let’s say seven years. I have to say the older I get, the more I get back into the pop side of things. I feel I kind of neglected the melodies I loved as a kid, and spent too much time listening to the beats.”

Can you tell us a little bit about the music scene in Belgium? “It’s a small country, but that only has advantages as far as I’m concerned. There’s things happening, and there’s definitely possibilities to do something. Brussels for example is not as saturated as some other capitals surrounding us. Another thing is you can play in different cities or villages which are barely a 30-minute drive apart, yet you meet new people and the vibe is different. Let it be known, I love the little villages! Apart from that I love the beer, the absurdities and the dualism of beautiful and ugly architecture here.”

You’re also closely related to the label On-Point. How does the label fit in with your musical goals? “On-Point is the mothership… Me and label boss Alex have travelled quite a few musical paths together, we also dj together, and although we’re -of course- different, we share musical visions. I love the label because it’s the child of one of my best friends, if it wasn’t for On-Point, I probably wouldn’t have thought of releasing tracks.”

There haven’t been many releases on the label, but every record seems to be loosely connected to hip-hop, jazz, or house. How important are those types of music to you and the label? How did they affect your musical output? “Hip-hop is definitely a common factor for a lot of us. Not only for the label but for a lot of the musical peers I meet. For a lot of us it was (musically) the first thing we were really into. So yeah, amongst other things that definitely affects how I make music or play records. As far as the label, I’m happy to see we’re getting a certain pace in the output. The 10th release will get pressed soon, and I’m hyped about that one.”

You haven’t put out a record since 2011’s “Take Care Of You / Diepgank”. What have you been working on since? “That’s partly true, haha. I make sketches really fast but when it comes to actually finish a track, I’m a slug. And even worse, I’m ultra picky about my own stuff. I guess the prospect of getting it released on vinyl gives me that nitro push, though. Anyway, I did a few remixes for friends which will come out soon on wax and I made a record with a friend under another name. This one track some might know called “Linh” is coming out soon as well on On-Point. Apart from that, let’s see what happens!”

The role of the DJ means different things to different people. How do you approach DJing? “It’s a cliché but I play the music I love, I do it with love, and I want to keep it interesting for myself as well as for the crowd. I get bored pretty easily, so I guess that kind of reflects in how I play.”

Aside from the new record, what else can people expect from you this year? “An attempt at letting my hair grow, which is something I haven’t done for the last 10 years, haha. And musically… A new collabo, who knows!”

Freekwency – On The Line (Forthcoming On-Point)

Miguel Campbell – Not That Kind Of Girl (Hot Creations, 2012)