London has NTS, New York has WYNU, Los Angeles has Dublab, Glasgow has Subcity Radio, Amsterdam has Red Light Radio and Berlin has…? Until recently there as been no Berlin based community radio similar to the stations just mentioned which is very surprising considering the reputation of its music scene and the amount of talented and creative people based in the city. Thankfully, local promoters/djs Anastasia Filipovna and Sarah Miles have taken it upon themselves to rectify this problem by launching Berlin Community Radio in March of this year. So far the station is composed of pre-recorded sessions available through their soundcloud page but after the recent acquisition of a permanent studio the station will soon be going live. Luckily, we got to exchange a few words with them to get the lowdown on BCR and they also each picked their favorite BCR shows which you can stream below.

First of all, could you tell us about yourselves and how you both got involved in the music scene in Berlin? “We have been living in Berlin for 4 (Anastasia) and 5 (Sarah) years, respectively and we both decided to move here for the music scene. Sarah worked in music PR for two big electronic music labels and at the same time she started DJing and got a residency at the Farbfernseher club. Anastasia moved her to study and she also picked up DJing (thanks to London’s Girlcore collective for the encouragement) which led to a weekly radio show on NYC’s Viva Radio.

Then, since nobody else was reaching out to all the interesting artists that were either living here or passing through the city we decided to start our own online radio show podcast called Welcome To The Room at the beginning of 2011. The show is recorded in the Farbfernseher club in Kreuzberg during the day/early evening and we usually record a two hour session of music and interviews. So far Andrew Weatherall, Move D, Gerd Janson, Axel Boman, Gatto Fritto, L.I.E.S.’s Ron Morelli, Delroy Edwards, Steve Summers, Maxmillion Dunbar and many more have all passed through our room.”

What made you decided to start BCR? “Having had great feedback about the WTTR show we realised that we could take it a step further and also that we could give more people the chance to create interesting programmes about Berlin and what they are doing here. We have been observing NTS, East Village and Red Light Radio and saw that a similar platform for Berlin was missing so, as with WTTR, we decided to do it ourselves.”

You recently found a permanent studio, could you tell us a bit about it? “It lies in the middle of our little universe which is close to Maybachufer and Hermannplatz in Neukölln. It’s on street level and we have a big front room which we hope will soon become a meeting place for like-minded Berliners from all corners of the creative scene.”

Why do you think there are not any other community radio stations in Berlin? “Some people have said that the radio culture in Germany isn’t the same as in the UK or the US. Pirate radio stations practically don’t exist here and it seems like a lot of FM stations either cater to mainstream culture or an older audience. Also, it is only very recently that so many people from around the world have been moving here and starting their own projects so perhaps there was not as much demand for this kind of radio platform before.”

You guys recently had your launch party, how did it go? Could you tell us a bit about the people who played? “Well. Unfortunately, the weather literally pissed on the concept of an open air day time BBQ but 80 loyal friends still showed up and supported us, ate some Chilean hotdogs and sat in the cold. There was a live performance by Heatsick who is our art contributor. He releases on PAN record label and his live act involves loopy Casio sounds, singing, shakers and sometimes a light show and perfume. We also had other contributors from the station present an hour of music – CreamCake, Lodown Magazine, Noisey, Pueblo and Welcome To The Room all DJ’d.”

Will you be organising more parties under the BCR banner? “We have a monthly residency at Prince Charles and the next event is on July 7th (details below). It will feature a rare live performance by Hyperdub’s Cooly G, a DJ set fromFuture Times boss Maxmillion Dunbar and also DJs from the station. The next party after that is on August 18th will feature a live show from Slava and a dj set from local promoters Urban Mutations.”

What is the concept behind the parties? “Our concept is to present an interesting live show as well as a visiting touring DJ we personally love alongside a selection of DJs from the station – always with an emphasis on variety. The parties are happening during the day but are not meant to be an after hour party. We want it to be more like a MOMA PS1 WarmUp than Panorama Bar. Also well as the music there is always great food and we want them to be community meetings.”

Stream: Author’s pick – Welcome To The Room No.26 with Aurora Halal & Sarah Miles

Judging from the website and the shows BCR seems to be an English language station, was this intentional? Will there be any German language shows in the future? “So far yes, the scheduled shows are all in English and in some ways this was intentional as we wanted to create a station that would cater for the many nationalities that now live here as well as our international following. We even have some upcoming contributors who have said they would prefer to speak in English even though they are German, so they don’t limit the audience and also because they are more used to reviewing music in English when they write for international magazines. Having said that, we are definitely leaving the door open for German speaking contributors and any other language for that matter.”

As well as music shows BCR is planning on having shows on other topics. Could you talk about the current non-music shows and the shows you have planned for the future?  “Heatsick is hosting a contemporary art show which should be online very soon and food critic Tommy Tannock will be doing a show about Berlin’s eateries. We have also scheduled a show by Pablo Larios, the assistant editor of Frieze Magazine, who is going to do a bi-weekly talk show with art-related content, guests and artist interviews.

There are still some slots free and we are currently looking for people to do interesting shows on all kinds of topics- film, current affairs, science, theater, TV-shows, politics, culture, sociology etc.. so if anyone is interested they can drop us a line at info@berlincommunityradio.com.“

Berliners can come see what Berlin Community Radio is about this Sunday July the 7th at Prince Charles and for everyone else follow them on Twitter and Facebook to keep up to date about the live launch. 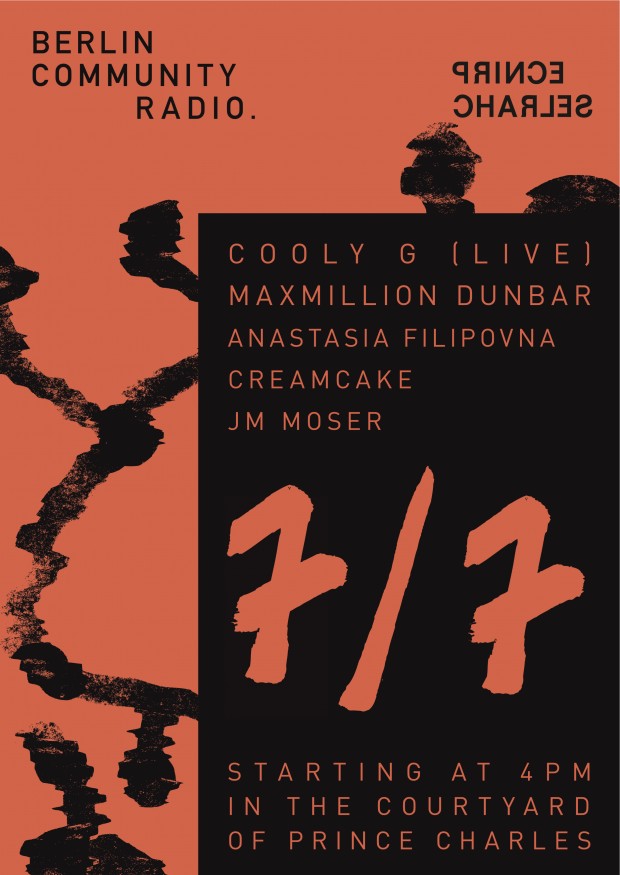 So much ice in our Rollies that shit don't tick. Twitter & warren[at]truantsblog.com.