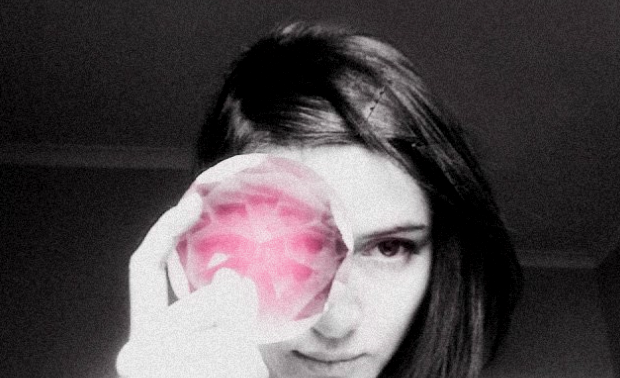 Using just one word, Edinburgh native and resident LuckyMe deejay Eclair Fifi once described the prolific Glaswegian label she calls home as colourful. It’s only fitting that this word, though abatedly, also perfectly describes her immense talent as a master selector where she comfortably hops between myriads of genres and auras like it ain’t nothing. Sure, having a varied and eclectic taste in music isn’t a strange phenomenon to many of us, but being able to effortlessly switch between deviating artists like Melé and Grimes and simultaneously being able to naturally make a seamless estimation of whether or not it’ll sonically work out isn’t just a matter of mixing skills anymore, it’s pure intuition. Thus it’s with great excitement that we proudly present this forty-sixth Truancy Volume provided by the based goddess herself, Eclair Fifi. For her Truancy Volume, the chef-turned-art-student has chosen quite the varied selection of tunes assembled into approximately forty minutes that will undoubtedly leave you wishing to leave straight for the club to burst out dancing. From rejuvenating Lone releases to classic Latin freestyle tracks by Cynthia, as well as juicy tidbits that are forthcoming on LuckyMe by Lunice and S-Type, there’s a little bit of everything on this tape that ends up catering to all of us. Keep reading for the tracklisting and a brief conversation we had with Clair on her summer plans, unforgettable gigs and the mixtape itself while you’re blasting these essential summer sounds.

Hi Clair! How have you been? What have you been keeping yourself busy with lately and what are your plans for the summer? “I’ve been good, thanks! Crazy busy as I’ve been trying to balance studying Illustration at art school and DJing out all the time. It’s a challenge but it’s fun and not the worst combination in the world. This summer I’m moving from Scotland down to London for the music, art and friends. It’s going to be an exciting few months.”

Over the years we can imagine that you’ve played to quite a variety of crowds and places. What was the best, most unforgettable gig of your life and could you describe the setting to us? “‘Sonar by Night‘ LuckyMe showcase on one of the main stages in 2010. It’s an obvious choice but I’d never played to such a big crowd before  as there were 12,000+ people. I went back to back with Hudson Mohawke. I was terrified before going on stage (especially since we didn’t prepare ANY music beforehand) but as soon as we went on I just embraced it, such an incredible feeling!! Like a dream. Looking up to a sea of people and seeing your best friends at the front cheering. The last tune we played was “Africa – Toto“… Don’t really need to explain much what the vibe was like but wow – thousands of people singing along in pure happiness.”

Is there a dream destination in the world where you’d love to play but have yet to play? “Another obvious answer but Japan would be one of my ultimate places to DJ. However big or small the gig, I really want to experience that (positive) culture shock.”

You recently had the opportunity to open for Lil B himself in Glasgow, how did that go? Any #based anecdotes to share? “It was really surreal. I didn’t even get to meet him so unfortunately I don’t have any anecdotes, even though I DJed before AND after him. I had to be on stand by to start playing music whilst he was like a little enigma that just floated away out of sight. You know when you see a rapper in music videos and you think it’s all show? Well he was exactly the same in person, I genuinely think his whole online persona is real, I didn’t sense a bad bone in his body.”

Tell us a little bit about this mix! How did it come about and what was the inspiration behind the tracklisting? “It’s a mixture of my favourite tracks that are out just now, some exclusives that not many people have heard and some old tracks that I have on vinyl that people need to hear. Most of my mixes are made on that basis, I don’t fixate on trying to have every single track unreleased and/or rare, too much good music out there to be that serious.”

What’s the perfect setting to listen to this Truancy Volume? “A buckfast fuelled afterparty in the height of summer would be my perfect setting, haha. Although I hope that people will listen to it regardless of setting and that it cheers them up!”

When was the last time you danced? “Right now in my chair. Woo.”

Complete this sentence: At heart I’m just a frustrated… “Tried to think up a clever reply but I’m not frustrated right now. Everything is awesome. <3”