Since moving to London from Porto, Mafalda has quickly established herself as one of best selectors when it comes to digging for rare jazz, soul and disco oddities. She’s described her way of playing as a way of celebrating her values and her role as as one of the people behind Melodies International has proved super important in trying to contextualise the music and reissues they release. With her bookings picking up steam, we caught up with Mafalda for a quick chat after this year’s Dekmantel festival, asking her on topics such as Melodies International, her Tropics of Love radio show, her love for Brazilian music and how she’s taking to a host of new found international festival appearances.

Hey Mafalda, hope you’re well! So just to start, one thing I enjoyed reading about you and Melodies International, is how with the zines, you like to contextualise the music you’re releasing. Can I ask what sort and level of research goes into telling these sort of stories? What’s the process like from start to finish. You’ve mentioned to Resident Advisor that these aren’t rushed and a lot of time goes into them. “Hi! The Melozine normally starts with a sort of brainstorm and ideas of what could work for that particular zine start to be written. After that, it’s a matter of talking to everyone we want to get involved. Something we always do is an interview with either the band or someone who had been involved with the record, this tends to be a long process in part because I’m not a journalist :) but also because the artists we release are normally not so tech-savvy, you know… pictures tend to be a funny problem because high resolution is not something they’re familiar with. It’s a super fun thing to do though, just long! While trying to gather everything and chasing people, I start laying everything on my laptop, doing silly illustrations and decorations and that’s it, until it’s all put together and it can go to print.”

Going from this and just picking out one of the records from the Melodies discography what can you tell us about the Maurice Moore and Family Affair Band zine? “That Melozine came out last year, it has an interview with Maurice himself, he used to DJ while he was recording to provide for his family, he also did radio for 10 years and released some pretty cool stuff, he’s awesome. Our friend Dj Love on the Run wrote about a gig he did with his mates back in ’97 at a hemp festival in upstate New York and the wonderful canyon of fireflies they encountered on their way back. Our friends at Numero Group contributed with a diary of their 2017 Japan trip, filled with great tips, there’s also our first feature about M.A.P. and Cosmic Slop in Leeds, Bec Rigby wrote a love letter to Eliane Radigue, there’s an interview by Sacha Taieb with Michael Orr who did Spread Love, playlists, photos, check it out!”

In terms of a recent record how did the Womack & Womack repress come about? Are the way these records lined up and put out ever similar to the last one or is it very much a different process each time? Love the little animation video that came from Nevil for the announcement too. “There are a lot of records we want to do, it depends on when we get the licenses and are ready to start working on a project. The process is more or less similar each time but every release is different, so we think about them individually. Ah, thanks! Yeah, Nevil is sooo talented!” 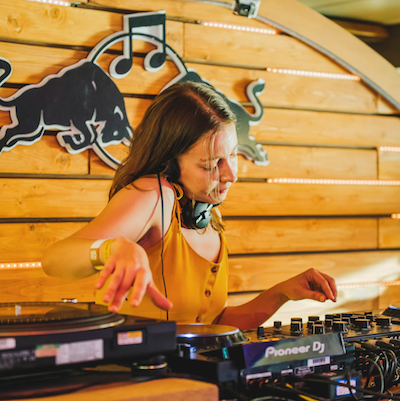 You’ve recently started your own show on Red Bull Radio called ‘Tropic Of Love’. What can you tell us about the direction of it and how you’ve gone about collecting some of the music for it? Want to quickly shout out you leading me onto Vels Trio by the way. That Yellow Ochre EP is a beauty. “The Tropic of Love is where I’ll be exploring and sharing music from themes that mean something to me – the next one will be music for peace! It’s an honour to be part of Red Bull Radio, I’ve always loved doing radio because of the freedom you get of not having a crowd in front of you – if you’re doing radio with and for open-minded people, it can be really rewarding – so I’m quite happy about being now able to host my own show. Ah, nice! Yea, Vels Trio are amazing.”

If you were trying to introduce someone to the genre or helping people expand their knowledge on the subject, do you have a few favourite tracks that demonstrate the breadth of the styles and sounds these jazz producers are capable of producing? What do you think it was that drew you to these in the first place? “I have a lot of favourite tracks, I would recommend everything I played on the first episode of Tropic of Love. That was sort of the idea with that show actually, to do an introduction to the genre – we still haven’t got a name for it, have we? What drew me to it is how amazing it is, it feels like such a perfect evolution, you know? It combines so many different eras and places – the genre’s capital is London so you naturally feel the city’s diversity in the music – and then it’s written and played by incredibly talented musicians who are often really young too. This is quite an exciting time for music!”

Similar question but if you had to run down the three most important parties you’ve attended that have possibly formed ‘Mafalda’, what would they be? How did they inform your music listening/DJing? “Such hard questions, haha. I’ve been to so many incredible dances, especially in London! I’m always inspired by DJs like Floating Points, Theo Parrish, Gilles Peterson, Cosmic Tom and Ade. It’s always a lesson to see them play.”

Where does collecting and listening to Brazilian music fit on the timeline growing up? You’ve stated how much you love the country’s music in past interviews. Any stories to share from certain records you’ve managed to bag? “I have always loved Brazilian music and recall listening to a lot of it with my mom and grandma, mainly Elis Regina, Caetano Veloso, Vinicius and a few other celebrated names. It was only after I moved to London that I started digging for other less known Brazilian records, which is funny I think. I do love Brazilian and Latin music – I have a lot of stories but nothing very interesting, I bug a lot of people to get these records, that’s it! It’s great because you end up meeting a lot of nice people who love the music as much as you and so everyone helps each other, normally! Records are a funny thing to collect, that’s for sure.”

You’ve mentioned in past interviews that you’re all currently thinking about where to possibly take the ‘You’re A Melody’ parties. What would you personally want these parties to achieve? Is there an end-goal you may have in mind? “We did a series of small parties this year at the Lion & Lamb, the last one will be in September or October. These have been quite fun to do but I guess we’re back at that point of having to re-think what we want to do next. I’d like to keep doing the You’re a Melody party but I haven’t thought about it enough yet.”

You’ve recently played Dekmantel, as well as a taking on a host of other festival appearances. How have you taken to these sort of new-found gigs? Is the transition to these sorts of setups something you embrace or do the nerves pile on? “The nerves do pile on! Last year was stressful because it was the first time I was doing festivals and some important stages too. There was no way to prepare for it other than doing it. So this year I’ve been feeling a lot better about these gigs, but I did get nervous before my Dekmantel set, of course, it would be weird not to, it’s a very special festival. I managed to relax after the first hour and I really enjoyed it in the end, I had such a good crowd.”

What else have you got planned for the upcoming months if it hasn’t been mentioned already? Anything else you’re low-key excited for? “In the next few months we’ll be releasing some fire on Melodies!I’m excited for all the upcoming gigs! I’ve just done Dekmantel Selectors in Tisno this month, then I’ve got Horst Festival in September (Holsbeek) and WHP with Rush Hour (Manchester) and Simple Things (Bristol) in October.”

Last usual question from us. When was the last time you danced and what was the last thing to bring a proper smile to your face? “Ah, that’s easy – I danced the whole sunday at Dekmantel, it was great! Daphni’s and Floating Points’ sets brought a lot of smiles to my face, it was the perfect day.”