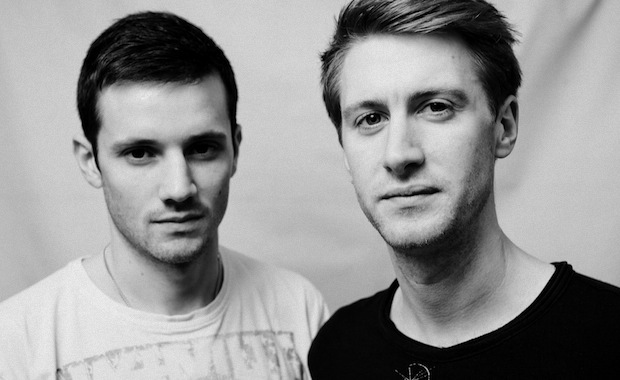 The London-centric producers Finn Casey and Thomas L have been making music and throwing parties together for half a decade, and emerged as Silk 86 at the start of the year. With the intent of exploring a housier direction under their new alias, they proved their adeptness at making dancefloor primed and melody infused grooves with their debut EP Clear Waters that was released on Manucci’s Mistress in January. Their second endeavour, The Pleasure Venture, came out on Sneaky Music at the start of this month and, as the producers explain, is their “best attempt at being sleazy via music without being drunk, or too sleazy.” And that is exactly what the release succeeds in doing – it is indisputably darker than their first record, but yet another diverting take on deep house with evocative  undertones.

Having had Silk 86’s mixtape for Eastern Electrics on repeat since its launch, we’re overjoyed with their contribution to our mix series. Although it seemed logical, from an arithmomaniac point of view, to wait three weeks before sharing Silk 86’s Truancy Volume, we decided to break away from our fixation with numbers and share the mix straight away. Showcasing the tracks they have been feeling over the summer, their instalment rounds off the season by going from Moodymann’s ABCD via their own productions to the likes of MM and Marco Benardi. Stream the mix and read our interview with Finn and Tom below.

Hello! Thanks for your Truancy Volume, and for speaking to us! How are you doing and what have you been up to recently? “Yeah, all good. We’ve been enjoying some transitional periods recently. One of us has recently moved house and the other has given up smoking, so between us we’ve had some dicey days this autumn but we have surprised ourselves and actually been pretty productive in the studio amidst all winds of change.”

How did you first meet, and what was the common ground between you two that made you decide you wanted to make music together? “We first met through a mutual friend and promoter, which we both worked on separate projects with. This led to us playing some of the same parties and that’s how we got to know each other, but we didn’t get round to collaborating until some time after that.” How did the idea of Silk 86 come about? Did you work on other projects together before CSY & Stripes, and will you ever revive that project? “Clear Waters was the start of it all really. We made that track as CSY & Stripes, but realised that it sounded a lot cooler than anything we’d done before and that we had the opportunity to move forward with a new direction under a new alias, if we wanted to. The EP was already signed, so we played the name game and ended up with Silk 86. CSY & Stripes was the first project we did, and as for its future, who knows! For the moment though we’re having a lot of fun doing what we’re doing.”

You live in London, have you always lived there? Have your surroundings been an influence on your output?
Tom: “I was actually born in Nottingham. It’s got a strong music scene and going to clubs like Stealth and The Social definitely shaped what I started listening to. I moved to London when I was 18 and haven’t looked back, but the Nottingham connection is still there and with guys like Citizen and Firas (Waze & Odyssey) both moving here from Nottingham, the small but quality scene it had clearly had some influence!”
Finn: “I was born in West London, but spent my school years down in Sussex, before moving back to London when I was old enough. The music scene was non-existent in Sussex, but being only an hour way from London let me stay in tune with what I was into.”

You’ve said that you were brought up on hip-hop, what kind of records were formative to your musical upbringing and how did your interests shift to electronic music?
Tom: “I remember getting pretty deep into a lot of the Prefuse 73 releases, in terms of more straight hip-hop ‘Reflections Eternal’ was something I hammered out a lot. Madvillainy was also huge for me, as was most the Stones Throw output! I also liked a lot of rock growing up, bands like Kyuss and Queens Of The Stone Aage led to me playing drums which I think has served me pretty well. In terms of dance records, I vividly remember The Chemical Brothers with “Surrender” being an eye opener. I’ve still got that CD somewhere and I must have picked it up when I was about 12, so it’s stood the test of time!
Finn: “As a kid, I was a massive fan of Michael Jackson like a lot of people at that time. His music was predominantly electronic, so the connection there was already apparent I guess. After MJ, I listened to the rock and blues that my parents were into, before settling into hip-hop in my early teens. Around that time, I came across Daft Punk’s Homework and it blew my mind. That album was definitely an eye opener for me, but I was too young for dance music and hip hop was cooler, so I spent my early DJ career on Hip Hop. It wasn’t until I started going to festivals that I saw how much fun electronic music could be.”

Your first release as Silk 86, “Clear Waters”, came out on Sccucci Manucci’s sublabel Manucci’s Mistress earlier in the year. How did this release come about and are you planning on going back to the label anytime soon? “We got intro’d to James (Vorres, who runs the labels), sent him some tracks and it all came together relatively quickly! There was the usual delay with producing vinyl etcetera, but we were really happy with how it came out. We haven’t confirmed anything but it’s definitely something we’d look at as the labels really gone from strength to strength. James is a good friend and a pleasure to work with, so yeah, it’s something we’d look at for sure!” Could you tell us a little bit about your upcoming 1Trax and Newington releases, and is there anything else we can expect from you in the near future in terms of releases or gigs? “Well, the 1Trax release is pretty much all wrapped up, we’re just waiting on remixes so we’re not sure when it’ll be out but we’re excited because it’s a great label! Newington we think will be in the new year, it’s still early days for the label but it’s another exciting project. We’re finishing off a few different EP’s for some really cool labels at the moment (nothing we can confirm with you guys yet unfortunately!). On top of that we’ve got a few tracks we’re waiting on vocals for which should be interesting, we’re also looking for decent female vocalists at the moment so if anyone thinks they’re up for it get in touch via our Facebook! :)”

How do you guys go about making tracks together, is there a certain method to it? Do you find there is a particular mindset you find yourself in to create what you consider your best work? “In music, the word vibe is over used for a reason. Being in a good mood is essential for producing fun stuff. Granted, it’s an incredibly fun thing to do, but people that smile 24/7 aren’t human so it helps when we’re both on blazing form. Banter is key too. You got to be able to make and take jokes about the various things you try out in the studio. Our creative methods vary, which keeps it interesting week in week out and hopefully contributes to the evolution of our sound.”

How do your DJ sets together come about, do you have a clear style of selecting your tracks or is it different each time? “We both tend to do a bit of digging in the days before our sets, so we’ll have some stuff we know we’re going to play before hand but the rest of it is pretty much off the cuff. We also have a few go-to bombs which we don’t play out often, but we know to always deliver the goods when necessary!” Which other DJs do you each enjoy seeing, and what makes for a good set? “In terms of DJ’s we’ve seen recently who’ve smashed it, Motor City Drum Ensemble at Secret Sundaze was pretty epic. Onur Özer, Cassy, Prosumer, Giles Smith.. all those guys kill it, which is why they are where they are right now. They seem to find that perfect balance between reading a crowd and imprinting their style on a night which is important. Groove is key, funk is a must, throw in some inventive song selections and you’ve got us hooked!”

Please tell us a little bit about this mixtape you did for us! How did it take shape and what was the inspiration behind your track selection? “This mix was our way of rounding off the summer. It showcases what we’ve been into this year and what we’re into right now, heading into winter and moving forward into 2014.” If at all, how does this mix differ from your usual approach to DJing? “Mixes are always a bit of strange one, because when you’re playing out you have the crowd and the vibe to feed off. Mixes like this are a bit more measured, there’s certainly more planning involved which gives us a bit of time to dig up some odd / strange tracks, but also means energy wise you’ve just got to go for it and hope it connects!” What is the ideal environment to listen to this mix? “When you’re tired, have an hour-long journey to make and know you need to be bright faced by the time you arrive at your destination. If the last track doesn’t pick you up, not much will!”

When’s the last time you danced? “This morning. Funk/Soul/Disco & Coffee.”

What’s London’s best kept secret? “The Unicorn Park.” And finally, where was the best lunch you’ve had recently and where can we get it? “There’s a really good Vietnamese place called Keu in Shoreditch, they do awesome Banh Mi baguettes which we regularly hit up! Also Burger Bear Burger Truck is THE place for burgers! If you’re in London find out where he’s setting up shop and go!”