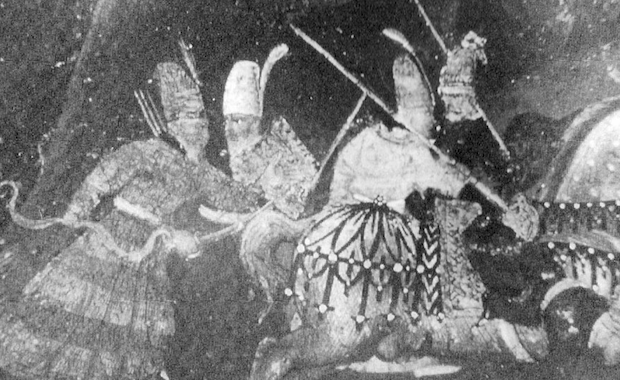 Voiski might not be a name you’re necessarily familiar with off the bat but we’re certain you’ve heard his music out on dance floors in the last year. Based in Paris his most recognisable track to most will likely be “Ad Infinitum” which was released on Construct Re-Form last year as part of the first release of a trilogy of EPs called the Unforeseen Alliance. Arguably one of the biggest techno sleeper hits of 2012 it was featured in Joy Orbison’s now revered Resident Advisor podcast and by Ame in their equally as impressive Tsugi mix. Striking the perfect balance between melodic hypnosis and repetition done right, the track builds its way up to a beautiful crescendo that works the peak time club moments like no other.

With the second Unforeseen Alliance release dropping last month along with another EP on Parisian label Syncrophone, Voiski still manages to fit in being one of the minds behind innovative net label Silicate Musique as well as working on a series of other aliases and regular collaborations. One of these takes form as Kartei with Crysta Patterson (Donna Renka) with whom he released a record with on the excellent W.T Records. With a blossoming music scene starting to happen in Paris and people starting to see it for the creative hive mind it is for young producers we caught up with Voiski, one of the many people responsible, for a small chat whilst he kindly provided our eighty second Truancy Volume. With his music having caught our ears for a while and recently having caught the ears of a certain label owner from New York, the mix is an elegant outlook and representation of the music that makes Voiski tick and we’re extremely proud to be sharing it.

For those who might not have heard of you before can you start by giving us an introduction to who you are, where you are from and how you initially got into producing and Djing? “I’m a French electronic producer from Paris. I grew up here and discovered electronic music in the nineties thanks to a very generous and older Italian cousin ha Ofcourse he was Italian as at the time that sound wasn’t very easy to find here. I was mainly listening to techno and electro very early on and I got into Djing at around the age of sixteen. Producing came one year later and I eventually started some side projects and collaborations. One of these is Kartei, which is a form of techno-cyberpop performing band which I work on with Crysta Patterson (Donna Renka). There’s also some other projects but I won’t go into detail on them here.”

You are one of the minds behind the Silicate Musique imprint, which we’ve been following and loving for some time now. Can you tell us a bit about the ideas that went about starting the label and the music you release on it? “I started the label together with Thomas Bethmont and Boris Dlutowski in 2008. Since the start it has always been a non profit DIY label ran in a micro-economy. We started as a free download net label just releasing some music from local artists in Paris, but after two years we decided to stop releasing ‘music for music’ and instead focus on more conceptual projects which we submit to the artist. We like to call it ‘protocol music’. We basically propose them an idea to work on such as a movie, a science fiction novel etc. and then the artist is free to do whatever he wants, be it even choosing the release format. Our last release for example by Rkob was released on VHS video tape and we even did some releases on flopping disks. We’re adamant that it has to make sense with the nature of the project however.”

I also wanted to ask about the Silicate workshops. How do these usually go about happening. Is it in a similar vein? “Yes, it works in nearly the same way. We propose a work protocol to a small group of artists which is usually constituted by free open internet submission. It is more about practising than technical learning. Sometimes we’ll make noise with different objects people bring and sometimes we’ll make noise using old video games, effect pedals and even data found on our hard drives. After a sound research during the workshop we propose a public live performance at the end of the day. We record the sessions and whenever something special comes out, we do the editing and propose it as a new release for the label.”

Moving on, Resident Advisor recently did a video on Paris as part of their Real Scenes documentaries which featured quite a few of your tracks. RA did a brilliant job in showcasing a part of Paris people might not have heard of before but we’re keen to ask about your own take on the city and if there’s anything you’d like to add on from that video. What keeps yourself based in Paris? “The RA documentary wasn’t really talking about the music made in the city. To put it simply Paris is full of artists, labels and exciting creations in electronic music and that’s the huge reason why it keeps me here. Being surrounded by a sincere and passionate community is something really important for a music scene. There’s people like Zadig, Dscrd, Antigone and the Dement3d guys and then there’s Ligovskoi, Nox Factio if you’re looking for something more on the noise ground. They are all responsible for the sudden blast here in Paris.”

Along with music, we also discovered that art and design is something you are very interested in. When did this interest start and are we right in thinking you might have studied it? “I think my interest in art started at exactly the same time I discovered techno music. The CDs in my cousin’s bag were all very minimally designed and often used metallic blue or grey pantone with very simple graphics in a similar way to Warp’s Designer Republic or !K7 covers. My first real graphic emotion was further amplified by my first musical emotion when I took the record out the sleeve and started playing a certain special record. ‘We have to sterilize the population.’ When I got older and I wondered what to do with my life, I went to a weird art school in a small city north of Paris called Cergy. At the time it was renown for their experimental sound department. Whilst there I learned a lot of things, from computer programing to field recording, but it’s also the place I learned patience, subversion and also developed a certain love for repetition.”

Can you tell us a little bit about ‘Mamali and His Doves In Art’. From what we can understand it was an album of music produced by you for this art exhibition? “Mamali Shafahi is an Iranian artist and a good friend of mine. He was kicked out of our art school for tying and blindfolding his performance teacher to a sport bench whilst walking on him naked and singing a Marilyn Monroe song. Was pretty awkward to watch, but still Iranians stick together, so before going back to Teheran he asked for a soundtrack for his next exhibition and I was really happy to accept. He explained me the ideas behind the exhibition and gave me the titles of his 13 pieces and then asked me for a slow techno mini-album. It was released on Silicate at the same time as the exhibition.”

In a past interview you stated you were working towards finishing a Kartei album. Is this still something that is happening and can you tell us anything about it? “Yes for sure it is definitely happening. We’ve got a couple of tracks finished for it. Most of them actually have come from our latest live performances. Since we got used to creating completely new songs for each live show we found out that we ended up with a load of tracks. So at the moment we are basically re-recording the greatest hits. It’s going to be a wildly colourful and weird album. We might have to find a label to release on it but we are working on that.”

Can you go through some artists that you are currently feeling right now? “At this very moment I am a great supporter of the Spectrum Spools label with guys such as Container and Outer Space doing great things. There’s also the sublabel of Mego which is currently producing some of the most innovate and almost danceable music at the moment in my opinion. There is also Svengalisghost, my dear flatmate and Steve Moore who are both on L.I.E.S and both incredible artists. I’d also like to congratulate Mr Abdulla Rashim for his constant work on Horizontality. Well done dear friend.”

Finally, can you tell us about the mix you have recorded for us? “It is a mix made with vinyl on two technics and a very basic mixer. Its content sums up my confusion towards contemporary dance music and the doubts I have when I see where techno is going sometimes. Since sharing my turntables with Svengalisghost I’ve also been watching and leaning towards records on other parts of my shelves. Records which are generally more for listening and not necessarily  for djing. It starts with some slow techno but a big emotional upheaval can be expected.”