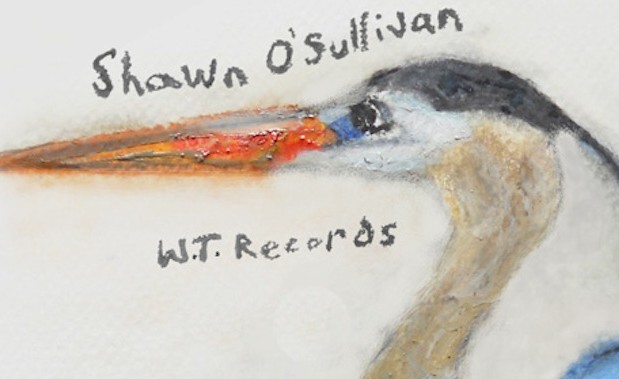 Shawn O’Sullivan is one of the more opinionated people in electronic music. On top of that, he has an almost encyclopedic knowledge of little known or recognized strains of music. During our conversation, he referenced his angst filled teenage years and the various types of music that accompanied it; that explains why his music tends to veer toward brooding, borderline thunderous, techno. From gabber to industrial, his taste for sonically destructive forms of music balances his cool composure. Under a variety of alias including Vapauteen, Civil Duty (in conjunction with Beau Wanzer), Further Reductions (with Katie Rose), and his band Led Er Est, he keeps himself more than busy. What’s next for him isn’t entirely clear, but he’s in no way slowing down, musically. His most recent work comes via Anthony Parasole’s fledging imprint, The Corner and New York Staple L.I.E.S. (under Vapauteen.) With numerous collaborations and a few records on the hush hush, we can expect to see his name (or variations of it) crop up more frequently. Below, is an excerpt from our chat. He’s also dusted off a few records and contributed the 79th installment in our Truancy Volume series.

Can you talk a bit about your background? “Keeping the story short, I grew up mostly in the Midwest, Farefield, Iowa. It’s the transcendental meditation town. I started DJing when I was 16. I was an eccentric youth and naturally gravitated toward eccentric and extreme music, so I was into noise, gabber, early industrial, breakcore, and hard acid – basically the most extreme electronic music I could find. That was really what I cut my teeth on – playing noise records to teenagers at the local youth center and terrorizing them until they kicked me off the turntables. I went to Bard College upstate and gradually got into italo, electro, post-punk, wave stuff. I DJ’ed that all throughout college and drank myself stupid; I had been DJing regularly at a bar. Eventually I drank myself out of college and wound up in New York. I met Will Burnett, Ron (Morelli), and all those people at some point over the last decade. Started going to the Wierd party in the mid ‘00s. That was a game changer for me. It was the first time in New York that I had encountered something that felt so new and interesting.”

Being from the Midwest, where did you buy all of these records? “I would go up to Iowa City. There was a record store called Record Collector that I pestered them into stocking some of the records I was looking for. The Midwest in the ‘90s had a really good culture for hardcore techno with the Drop Bass Network scene. All that stuff was just around. I’d order from mail orders and when I went to other cities I would check it out. Going to Strange Records, which used to be in New York, and Sonic Groove.”

What made you want to start making music? “I had always made music since I was a teenager. In college, using a laptop and Max/MSP was it. If you were seriously into electronic music you devoted yourself to the laptop. That was the absolute cutting edge. It took me a long time to realize I didn’t work well on a screen. The big developments for me were: meeting Sam, who I started Led Er Est with, and seeing Sean McBride, Martial Canterel play. Sean put into perspective the possibility of truly live electronic music. That was one of the big things that got me excited about making music again.”

The music of Further Reductions and Led Er Est are sort of in the pop realm, but still dark and has your signature on it. Are you into pop music at all? “With Further Reductions Katie and I met because we both DJ’ed and it has been a platform for us to play around with a slightly different set of influences. She definitely has more of a pop ear and ear for melody than I do. There’s a lot minimal synth and italo influences, some techno and early house influence. We’ve kept our parameters pretty broad. We have a record coming out at some point on Cititrax, the Minimal Wave sublabel. That stuff has some darker techno elements as well as early IDM.” When will that be released? “I have no idea. Katie needs to finish up some vocals on some of them. I don’t know what the schedule is like these days. Hopefully, it’ll be out by the fall.”

What’s the process like with you guys? “Vocals are always recorded afterward and sometimes Katie will overdub a synth part. Generally, it’s the same process – everything recorded pretty much all at once. When you work with other people it’s hard to be as purist. Streamlining your methodology allows you to work a lot faster and that for me is the real key to it. When that methodology becomes a hurdle itself then you have to rethink it. When you’re working with other people it may be hard to get the right take and if you’re recording a song 14 times before the right take then that starts being a hassle.”

When did your Civil Duty project with Beau Wanzer form and what are some of the goals with it? “Beau and I met a long time ago. He would come to New York to come to the Wierd Party and whatever shows. We talked about making music for a while and then we actually got around to it. He works in more or less the same way that I do, which is working as immediately as possible. We speak a similar language in a musical environment. Collaboration with Beau has been very easy and fruitful. We recorded a bunch last fall and that was one of the tracks on The Corner record. We recorded more when I was out in Chicago doing a few Further Reductions gigs with Katie.”

Is there going to be another record with The Corner? “I think we’ll have another 12-inch out next year on The Corner. We need to organize those tracks. Anthony [Parasole] wants to do another Civil Duty record; it’ll just be a 3 or 4 track 12-inch. I’ll also be doing another solo record for The Corner.”

Can you tell us a little bit about your Truancy Volume? “I was going to do a mix of just hard ‘90s techno and acid, Downwards, PCP stuff. I pulled records out to do this. Then I put them aside somewhere and when I went to pick out records again I picked a bunch of contemporary stuff. So there’s a mix of contemporary techno and older stuff. It did come out a little weirder than I expected – it’s pretty scattered and abrasive of course.” It’s a really rugged mix. “There’s a lot of great techno going on these days. That’s one of the reasons I got back into doing proper dance floor stuff. Techno’s in a better space than it’s been for years. Arguably, it’s even better now than during certain periods in the ‘90s.”

Who are some of the artists you rate highly? “Ancient Methods were really the first that I heard who pricked my ears up. I had stopped listening to dance music for years. Everywhere had gotten bad. In the mid to late ‘00s the only interesting things to me were some of Jamal Moss’s music, some of the Dutch stuff – Legowelt, Bunker Records. There was a lot of productive experimentation going on. Anyway, my friend Evan burned me a CD in 2010 with some Traversable Wormhole, Ancient Methods, some Sandwell, and some other contemporary stuff I had slept on. Hearing Ancient Methods was thrilling. For me it evoked the best of the Downwards and British Murder Boys stuff as well as some rhythmic noise and even a little bit of PCP Records. As far as other new stuff, I like most of the stuff on Avian and Perc Trax, Sonic Groove, Milton Bradley’s Acid Rain stuff, there’s lots of good stuff these days really.