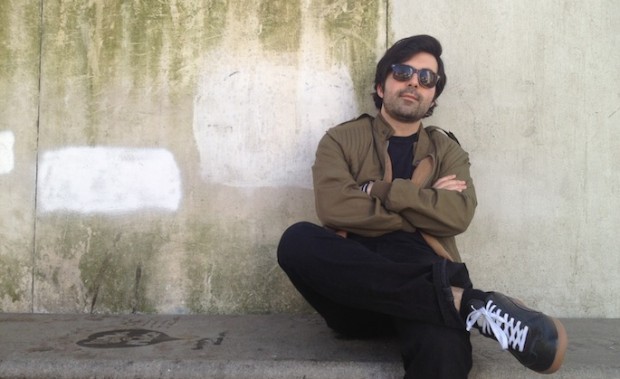 The guys at Mister Saturday Night have done an excellent job unearthing talent based around New York. One of two new artists Eamon and Justin have introduced us to this year is Alex Burkat. Originally from Philadelphia, he’s settled on New York for now. His days are spent editing videos at the music production and DJ school Dubspot. However, his nights are marked by trips to some of the city’s smaller venues and teeming with his constant stream of Instagram photos. We fell in love with his debut record “Shower Scene“, an auditory snapshot of a perfect night at the 12-turn-13, and thought it fitting for him handle one of our summer Truancy Volumes. What he delivered is about an hour of ready-to-dance jams and one of the best introductions we’ve had. He also took some time out to answer a few questions about his past and future plans.

Hi Alex, how have you been? “Not bad. Ultra busy working, making music, DJing, and enjoying New York when the weather’s nice.”

You’re originally from Philadelphia, what was it like growing up there? “I grew up in Philly, went to college in Pittsburgh, studied abroad in Prague for six months, lived in Philly for two years after college and now I lived in New York. As far as music, what I like about it is the independent music scene is very undivided. I miss that. If you’re not into Jersey Shore music, you end up meeting a small yet really dedicated community of artists and people who love music. You go to a punk show, hip-hop show, techno party all in the same night and bump into the same people.” Do you feel New York is much more fragmented? “I just think that there’s so many options in NYC that it becomes overwhelming, and you stick to the same haunts. Whereas if there’s only a couple spots to go to in Philly, you end up going to things you wouldn’t otherwise, and bump into more people with a similar, open minded view.”

What were some of the spots your frequented while in Philly? “My favorite party was Jang House, hosted by Siyoung every Monday night at The Barbary. Siyoung is still my favorite DJ. He can murder any style and mix it in seamlessly.”

It seems like Philly really left a mark on you. What initiated your move to New York? “I think Philly taught me to always be yourself, not to be self conscious, be able to laugh at your mistakes, be honest, and things don’t have to be divided (only going to techno nights, only going to dubstep nights, etc.) I just grew up in Philadelphia and wanted a change. I didn’t know what I wanted to do with my life after college. I worked weird jobs (intern at an ad agency, receptionist at a gym, bellman at a hotel…) and figured if I don’t move to NYC now, I won’t ever. And in October it’ll be 3 years.”

“Shower Scene” was dubbed your inaugural release. Is there a story behind it, beyond the press release? “I started working on Shower Scene when I lived in Philly. It was just a sketch of an idea. Then I went to Mister Saturday Night at 12turn13. I got there early and they were playing slow, chill music, something that is so refreshing when you’re going out. You can tell they know how to curate an entire evening. After that night, I went home and finished Shower Scene. Then sent it to Justin on Facebook, I think; they didn’t have a label yet. I just wanted them to play it on their system and see how it would sound and how the crowd would react. Fortunately, they liked it so much they wanted to release it.”

So what does your studio look like? “ I use Ableton Live and a lot of samples, but looking at another grid in Ableton after working eight hours on another grid (Final Cut Pro) makes me want to bang my head against a table. So I’ve been making music with other friend’s setups and finishing them later. I’ve really enjoyed making music with my Friend Zac Colwell (of Chappo, Fancy Colors.)”

Any collaborations on the horizon? “I’ve made one song which I really like with this process, but I need to make more music in the style of it before I start doing anything with it. I would like to work with more vocalists when the time comes and I have the right song for it. I do have an official remix for !!! coming out on Warp.” Did they approach you? “My friend from Pittsburgh Paul Quattrone drums for them now. They had an album recently drop. I hit him up asking if they needed a remix, he said “yeah…here are the stems. Can you get it done in a week?” I said sure. Then dropped every single thing I had planned and finished it in 3 days in an insane marathon of coffee and round house kicking in my apartment.”

That sounds intense. In terms of music you’re currently enjoying, who are some the artists you’ve been listening to and playing out? “I really love everything that comes off of Golf Channel Recordings. Also I’ve really been getting into a lot of South African house music producers. Culoe De Song is my favorite, but there are so many talented producers and DJs from there it’s unbelievable. I love Cassy and Donato Dozzy a lot. I’ve been digging into Andrew Weatherall’s discography a lot. As far as New York artists, just my friends, honestly – Lamin Fofana, Max McFerren,  and Astrolith. I also love what L.I.E.S. is doing. Anyone who can make me dance and say “man, what the hell is this?” gets my vote.”

As of right now you’re the reigning champion for “Best Truancy Volume Intro”. What’s next for you this year beyond? “Honestly I’m in no rush. At the moment I just need to roll up my sleeves, get back in the studio and make more songs that are better and different than my current releases. I want to DJ a lot more and enjoy summer in New York. I put up with winter for a reason!”

And now that standard last question, what’s your drink of choice? “Black Coffee. All day, every day. The stronger the better. No cream, no sugar. Other than that, Brooklyn Lager of course.”

(But First, A Word From Our Selecta…)