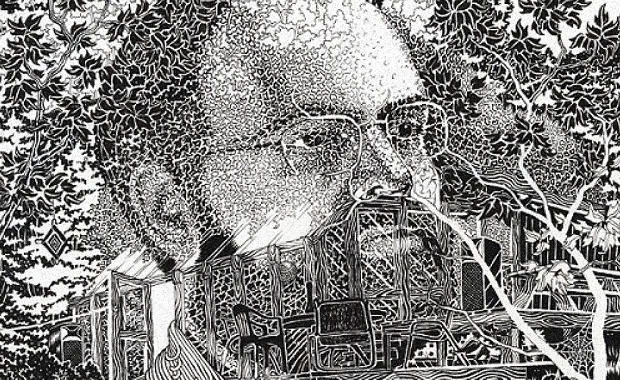 Andrew Field-Pickering, commonly referred to as Maxmillion Dunbar or Max D, is in control of the decks for Truancy Volume 53. He is one half of the Future Times, the label responsible for some of dreamiest and tastefully retrospective music of the last few years. Coming from a background rooted in punk music, Pickering began his journey in high school through bands. At the same time his curiosity led him to delve deeper for the source material of the hip-hop songs he heard which brought disco and DJ culture to his attention. Musically, he’s part of Beautiful Swimmers with Ari Goldman, the lyrical front man of Food For Animals and on his own he’s behind the layered and synth-drenched music of Maxmillion Dunbar. With all these projects under his belt it’s difficult to imagine where he finds time to keep the label afloat. Despite his his chaotic schedule, he’s gathered up his Jon Hassell records and crafted a journey suitable for an afternoon sipping your drink of choice on a rooftop or just a lazy sunday. A skilled composer and trumpeter, Jon Hassell coined the term Fourth World as a catch all phrase for the philosophy behind his music. He’s even collaborated with some of our favorite musicians, such as Brian Eno. With all that said, we hope you enjoy the vibes of the 53rd edition of our mix series.

Hi Andrew, how have you been and what was the idea behind this mix? “I’m doing alright man, chilling. I’m tying up a lot of loose ends at the moment. I guess the idea was to distract myself by doing a mix. Or to be real, I just came up on a couple new (to me) Jon Hassell LPs in the neighborhood and wanted to dig in on the dude, add these new ones to my collection of his stuff and make a whole mix, do something different than club-oriented mixing. Something for the freaks.” Jon Hassell’s music, generally, isn’t the type of music you just stumble across, how were you introduced his music? “For me, its totally music I stumbled across. I think my buddy Jan pushed me Hassell’s way with some MP3 love first but my entire collection of his LP’s wasn’t too hard to find. It’s one of those things where you hit the “H” Jazz section at a store and find two or three of them. I guess the art, which is usually amazing for Hassell records, drew me in too. A lot of the art is by the same dude who did like Bitches Brew and Live/Evil for Miles Davis.. Sick shit.”

Has his music had a particular effect on the music you make now? “I mean for sure, I think people can hear his influence in my tracks. I like to get into dreamy places with my music and his music is at times in a totally different world than any other in music. The people he plays with are inspirational.. the idea of a band too, playing music this deep; free but coordinated. It would be awesome to go even deeper into my music and sort of leave the grid rhythmically like Hassell does. His scratchy trumpet is an all-time favourite sound of mine. You always forget it’s jazz, or coming from jazz.”

Hassell coined the phrase “Fourth World”, would you consider your music Fourth World music? “I don’t think so. I don’t know, I think it’s a few worlds removed and I think Hassell’s idea was pretty singular. I’m not sure that I can even stomach most attempts at really heady world music, you know? It pretty much works strictly for Hassell. As we become more global as a people all things begin to seep out and inform each other, little snatches of online rhythm can inspire you very quickly, maybe he was just kind of clairvoyant about everything eventually blending and got to it early. I definitely draw inspiration from the Fourth World.”

How did you go about recording this mix? “I just DJ’d a few of the records together and then played with it after a little bit.” How does this mix differ from your usual approach to DJing? “Well, like all sets I wanted to keep a vibe going, but once I put it in the computer to finalize, send, whatever, I got into it a little more, looped some things up, just kind of took the mix as I made it and considered it one big sample, had fun with it.” What is the ideal environment to listen to this mix? “Chilling in the extreme! Headphones.”

All songs by Jon Hassell, loops and layers by Max D